How much money does a person working in Oman make?

Distribution of Salaries in Oman A Master's degree program or any post-graduate program in Oman costs anywhere from 8,920 Rial Omani(s) to 26,800 Rial Omani(s) and lasts approximately two years. That is quite an investment.

Though gender should not have an effect on pay, in reality, it does. So who gets paid more: men or women? Male employees in Oman earn 12% more than their female counterparts.

How much are annual salary increments in Oman? How often do employees get salary raises?

Employees in Oman are likely to observe a salary increase of approximately 7% every 19 months. 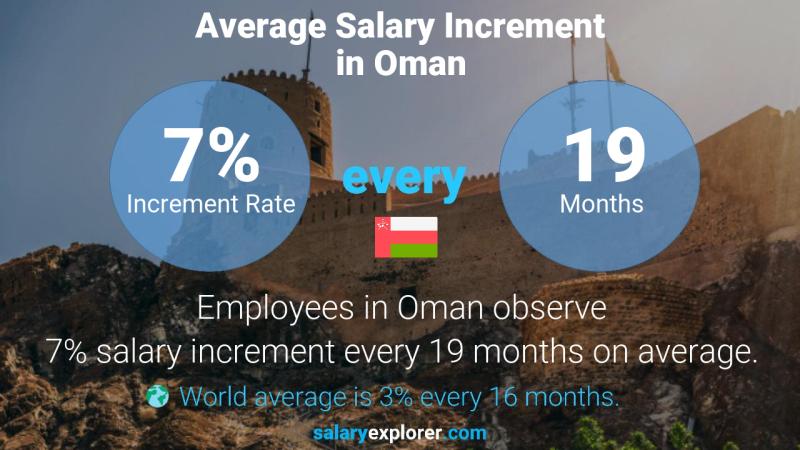 Listed above are the average annual increase rates for each industry in Oman for the year 2019. Companies within thriving industries tend to provide higher and more frequent raises. Exceptions do exist, but generally speaking, the situation of any company is closely related to the economic situation in the country or region. These figures tend to change frequently.

Bonus and Incentive Rates in Oman 54% of surveyed staff in Oman reported that they haven't received any bonuses or incentives in the previous year while 46% said that they received at least one form of monetary bonus. Where can you get paid more, working for a private company or for the government? Public sector employees in Oman earn 7% more than their private sector counterparts.

If you are only interested in viewing statistics and salaries in a specific career field, then choose one from below, or continue scrolling down for more interesting facts about salaries and income in Oman.

Salary Trend and Forecast in Oman

How are Oman salaries changing over time? The chart below shows the average salary change in the past few years. Share This Chart  Tweet      Get Chart Linkhttp://www.salaryexplorer.com/charts/oman/salary-trends-and-forecast-monthly-oman.jpg
Percentage increase and decrease are relative to the previous value

Salaries in Oman are on the rise in the year 2020 based on recent submitted salaries and reports. As displayed in the chart, salaries in 2019 are 2% higher than those of 2018. The trend suggests a slow yet continuous increase in pay in 2021 and future years. These numbers may vary from industry to another.