How much money does a Skin Care Specialist make in United States?

This is the average yearly salary including housing, transport, and other benefits. Skin Care Specialist salaries vary drastically based on experience, skills, gender, or location. Below you will find a detailed breakdown based on many different criteria. 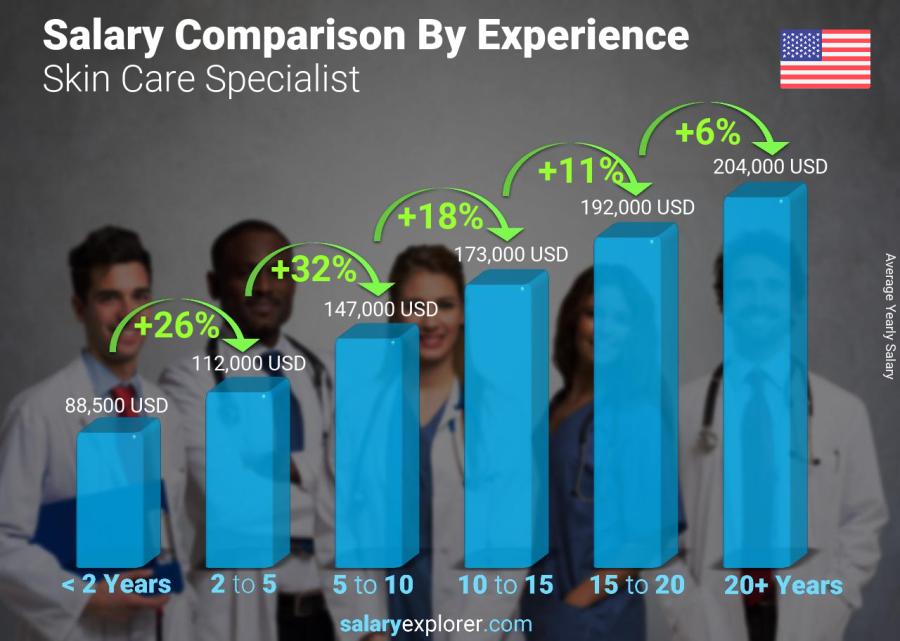 The experience level is the most important factor in determining the salary. Naturally the more years of experience the higher your wage. We broke down Skin Care Specialist salaries by experience level and this is what we found.

A Skin Care Specialist with less than two years of experience makes approximately 88,500 USD per year.

While someone with an experience level between two and five years is expected to earn 112,000 USD per year, 26% more than someone with less than two year's experience.

Moving forward, an experience level between five and ten years lands a salary of 147,000 USD per year, 32% more than someone with two to five years of experience.

Additionally, Skin Care Specialist(s) whose expertise span anywhere between ten and fifteen years get a salary equivalent to 173,000 USD per year, 18% more than someone with five to ten years of experience.

If the experience level is between fifteen and twenty years, then the expected wage is 192,000 USD per year, 11% more than someone with ten to fifteen years of experience.

Displayed below is the average salary difference between different Skin Care Specialist(s) who have the same experience but different education levels. We all know that higher education equals a bigger salary, but how much more money can a degree add to your income? We broke down Skin Care Specialist salaries by education level in order to make a comparison.

When the education level is Bachelor's Degree, the average salary of a Skin Care Specialist is 106,000 USD per year.

While someone with a Master's Degree gets a salary of 142,000 USD per year, 33% more than someone having a Bachelor's Degree degree.

A PhD gets its holder an average salary of 202,000 USD per year, 42% more than someone with a Master's Degree. Though gender should not have an effect on pay, in reality, it does. So who gets paid more: men or women? Male Skin Care Specialist employees in United States earn 5% less than their female counterparts on average.

How much are annual salary increments in United States for Skin Care Specialist(s)? How often do employees get salary raises?

Skin Care Specialist(s) in United States are likely to observe a salary increase of approximately 12% every 14 months. The national average annual increment for all professions combined is 8% granted to employees every 16 months. A Skin Care Specialist is considered to be a high bonus-based job due to the generally limited involvement in direct revenue generation, with exceptions of course. The people who get the highest bonuses are usually somehow involved in the revenue generation cycle.

Skin Care Specialist VS Other Jobs